After some deliberation I’ve settled on my ten favourite albums of 2014. There’s a note at the end about my methodology, as this is clearly an objective endeavour, but without further ado here is the list:

Completely unexpectedly, this was great. I was drawn in by the track featuring Matt Berninger of The National but found the rest of the record was as good. More synth-based than before, streamlined line-up, might be (probably is) better than their much-heralded debut.

Second album but new to me. Sparse but fuzzy, like Cat Power fronting Sebadoh.

Hard not to shake the feeling it’s slightly “background music”, but I appreciate the restraint in the music. Reminds me of Jessie Ware or The XX and the Rhye album by way of The Sea & Cake. Flew surprisingly under the radar for a major label release that could be marketed to people who like London Grammar.

The longest album on this list, and probably the one that works most as a single piece. Great use of brass instruments. Works well as going to sleep music.

It’s the obvious rap album to include, isn’t it? Sounds great in the car, often clever, frequently funny and no filler in sight.

Probably TVOTR’s most straightforward record to date. I wasn’t keen on ‘Nine Types of Light’, though it’s better than I remember it being, ‘Seeds’ is more like ‘Dear Science’. Definitely more slick than the first two albums. The version I have has probably my favourite packaging of the year – it’s a scanimation, apparently.

Like with Angel Olsen, this isn’t the first Strand of Oaks album but was the first I was aware of. For an album that appears to be presented as “sad bearded guy-singer songwriter” music it’s pretty varied and engaging. “JM” is a loving homage to Jason Molina/Songs:Ohia, elsewhere there are nods to Band of Horses, Big Country and 80’s synth-pop/alternative rock.

I have a lot of “favourite bands”, the Afghan Whigs are one of them. For me, ‘Gentlemen’ and ‘Black Love’ are two of the best rock records of the 90s. ‘Do to the Beast’ isn’t quite on the same level, but it’s a fine return from a band that a few years ago I thought were over for good. I have to admit that in a lot of ways it feels more like a Twilight Singers record than a Whigs one, but that’s not a huge problem – the first Twilight Singers record feels of a piece with the last Whigs album (‘1965’). Just a shame I never saw them on the reunion tour with Rick, but never mind.

Recommended: “Lost in the Woods”

At first I thought this wasn’t as good as the best bits of ‘Tape One’ and ‘Tape Two’, and that maybe a “debut” album of completely new material was a missed opportunity. I kept listening and realised I was being daft. There are the immediate high points (“Get Up”, “Low”, “War”), but there are also tracks which took time to sink in (“Am I Not Your Boy”) or that just help with the flow of the album as a whole. The important thing is that it feels like a cohesive album, all of one sound and mood, as claustrophobic as that might be in places. Musically it’s more distorted and discordant than their earlier work, less immediately accessible in places but ultimately more rewarding. In the end, ‘DEAD’ is a 35-minute document of just how far Young Fathers have grown on their own terms. Non-album single “Soon Come Soon” bodes well for their next album, already recorded and due in April 2015.

If that’s not enough, here are half a dozen “honourable mentions” – records that for whatever reason didn’t make the top ten but I felt were good or in some way notable all the same:

And because such things matter, here’s my top ten Scottish albums of 2014:

A Note on Methodology

Eligible albums were released during 2014 (UK release date takes precedence). EPs that have been released as mini-albums are included, re-issues and compilations are not. 140 titles were eligible, tracked in an iTunes playlist.

Albums are ranked based on a normalised score calculated using iTunes play counts (60% of final score) and a completely subjective marks-out-of-ten rating (40%). The play count element comprises of a mixture of average track plays, total time spent listening to each album, plays for least played track and a measure of how concentrated the track plays were – i.e. an album where I mostly listened to just a few of the songs would be marked down compared to an album where I listened to all of the tracks the same amount. This latter element requires a bit of further refinement.

Everybody likes graphs, so here are a selection of graphs.

The first graph shows the average track plays plotted against the final score:

The second graph shows the total listening time plotted against the final score:

The third graph shows the distribution of my rating out of ten for each album: 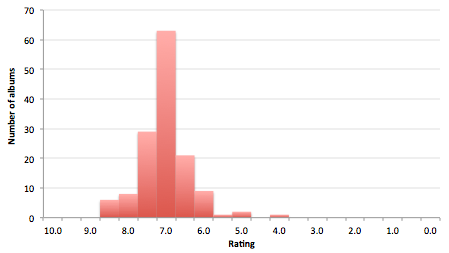 And finally, a pie chart of the primary country of origin of each record: 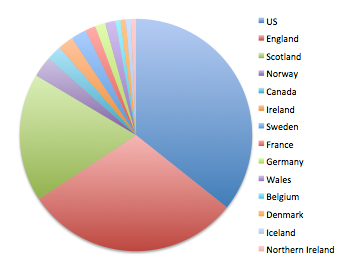